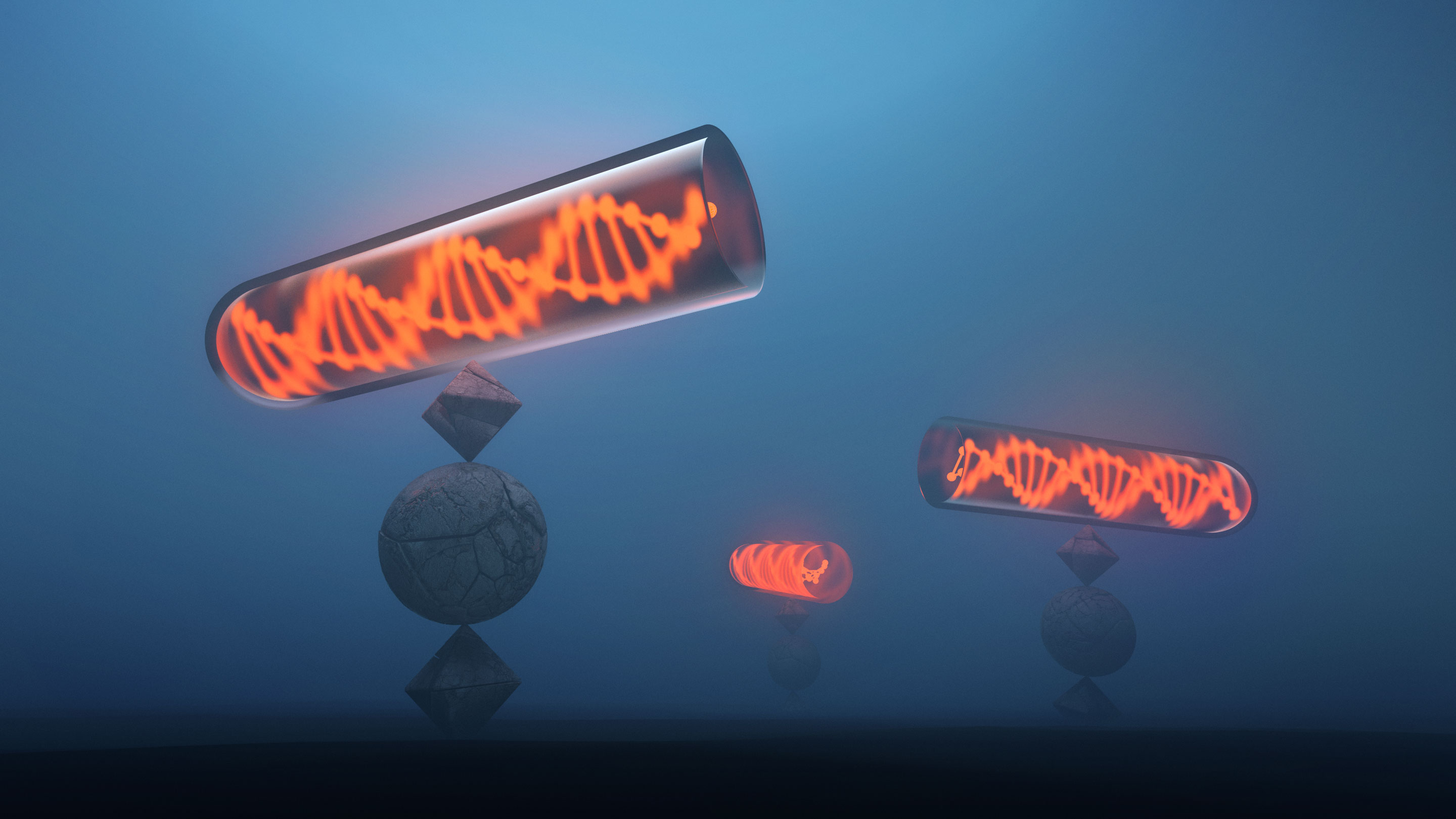 The Core Regulatory Circuitry (CRC) is a set of genes that define cell state and identity by encoding transcription factors. In certain cancers, we have shown CRC to be selective dependencies. We are now elucidating the critical CRC circuitry CTRC in acute myelogenous leukemia (AML). We have shown that BET inhibitors trigger CRC transcriptional collapse in AML cell lines. We have integrated multiple sources of epigenomics data including ChIPSeq, HiC seq, HiChIP, DNase, Degron, WGS, RNAseq and PerturbSeq, to uncover patterns of co-binding that might explain selective AML dependencies. We will present a data integration pipeline and show early results on CRC co-occupancy mapping in AML cell lines. Additionally, we discuss the lessons learned in quality control and bias correction that may prove useful for deep epigenomics analysis.

Enhancers are epigenetic features marked by H3K27ac in mostly non-coding regions where transcription factors bind, often as condensate, and recruit transcriptional machinery of the cell to transcribe downstream genes.

Large stretches of enhancers are often called super enhancers (SE), and it is believed that a subset of SE-marked genes constitute the CRC of a cell. 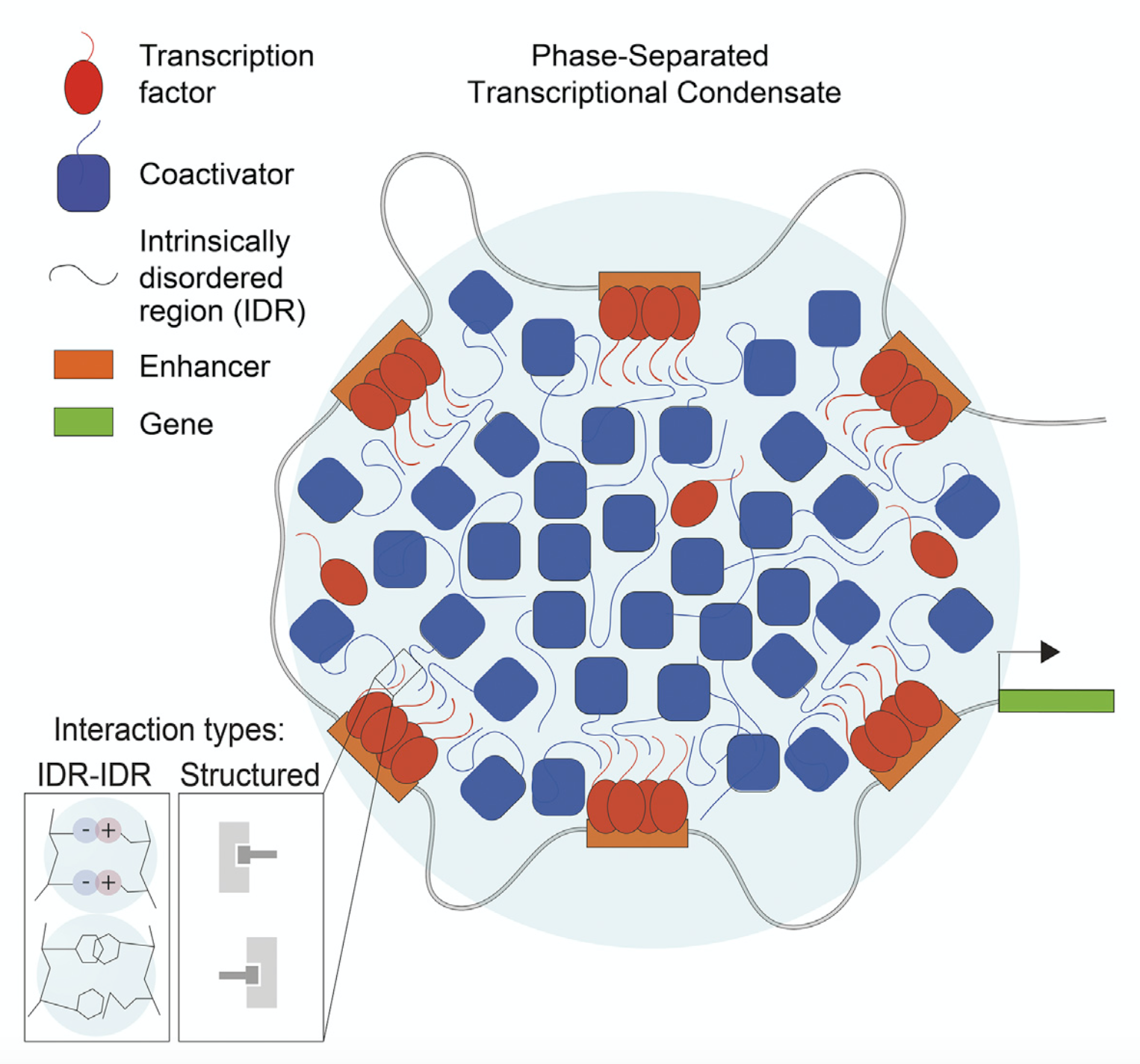 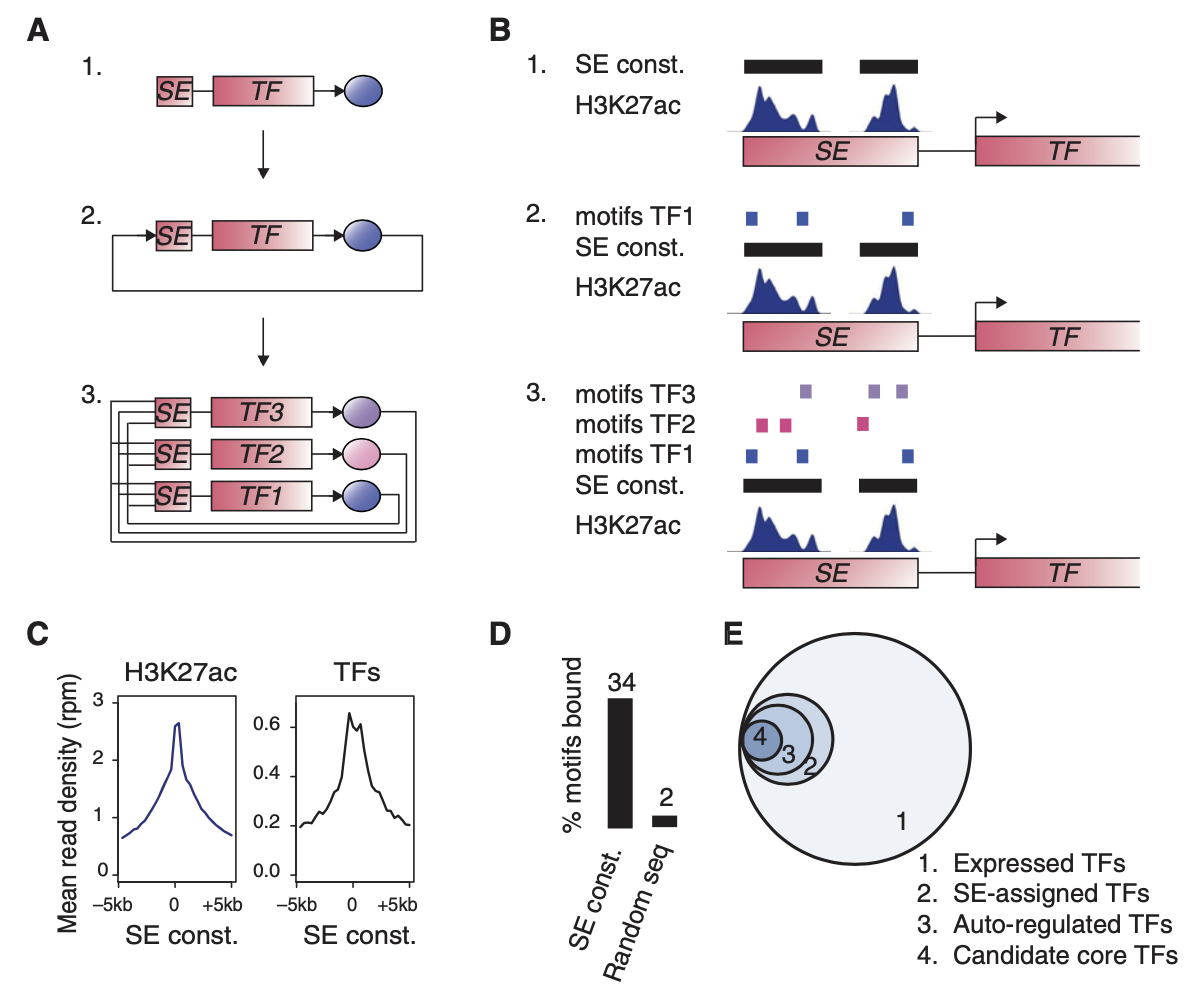 These aggregates help create and are found in 3D structures of the genome called Topologically Associated Domains (TAD)s. 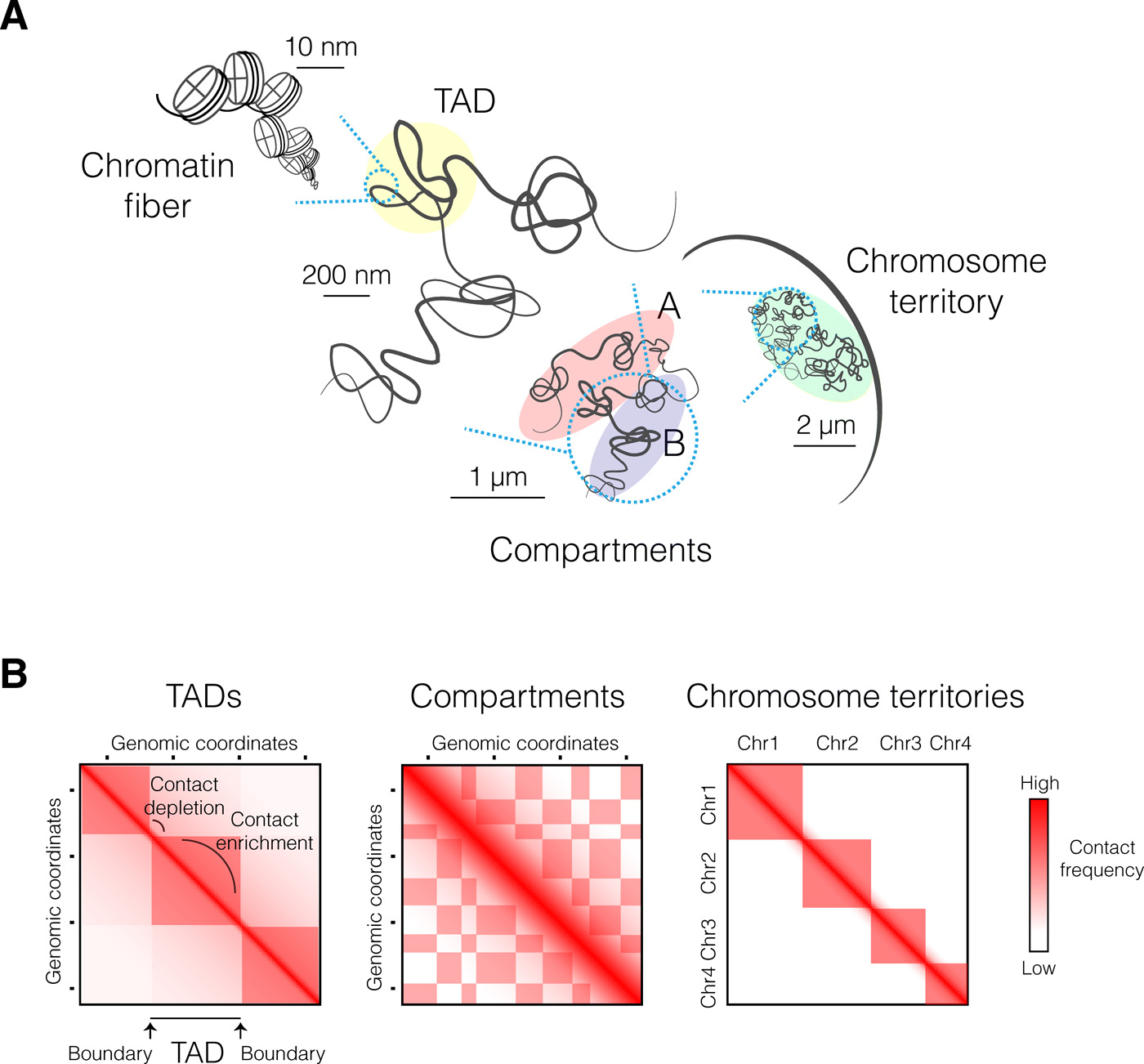 In certain cancers, like Neuroblastoma drugs that target transcription have been shown to first disrupt the expression of CRC members before triggering transcriptional collapse and cancer cell death. AML is one of the cancer types known to be targetable by such JQ1-like drugs. These drugs, called Drugs called BET inhibitors interact with the bromodomains of BRDx proteins and prevent them from binding to H3k27ac and inhibit transcriptional activation, impacting mainly the expression of MYC. 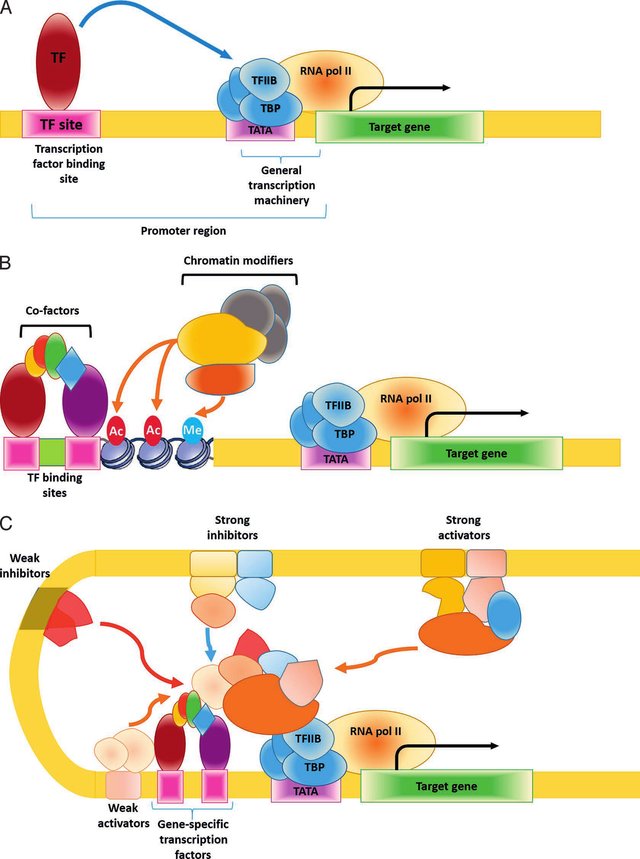 Our goal is to better understand the epigenetic and genetic regulation of transcription by the core regulatory circuitry in AML by integrating a variety of epigenetic data, including H3K27ac, specific TF ChIPs and 3D structure, with genetic dependency data. Here we show the transcriptional responses to small molecules targeting a CTRC member as well as systematic knock-out of the CTRC in AML.

The work was done together with the Orkin Lab from Boston Children’s Hospital and the Stegmaier Lab from the Dana Farber Cancer Institute.

We will be presenting preliminary and unpublished results. We yet have to finalize some of our analysis and create our integrated predictive model.

One of the end goal of this project will be to see what enhancer features will allow us to predict RNA expression. A linear model would then let us know what set of features is the most predictive, how they interact together and figure out why.

we can see on this that epigenomic data is converted into a set of features accross enhancer regions. The enhancer are then mapped to genes and the set of enhancer*features is then used by the linear model to find back expression of the gene and its essentialness.

Reviewing the processing and analysis

Given the CRC of AML (which we defined here as the super enhancer marked TFs), we were able to manually locate the subset of them being essential in our DepMap screens.

We defined the critical CRC as being enriched (limma, p<0.05) in AML cell lines in Depmap vs all others or as being strong dependencies in Depmap (<-0.5 in at least 2 AML lines).

We first received RNAseq samples from different AML Cell Lines under 200um of JQ1 and JQ1+MS2 at 8h and in MS2 at 2, 4, 16 and 24h. The idea was to identify a transcriptional collapse starting with the CTRC and propagating to their target genes. All RNAseq was processed with STAR on Terra according to the CCLE pipeline.

We ran DESeq analysis on it and could not find a reliable signal after 8h as the sequencing depth was kept the same for each sequencing, meaning that we could not see a transcriptional collapse.